Marijuana legalization in the United States has a very long and controversial history.  What begun as a crusade against marijuana and those who used it back in the 1960s and 1970s has evolved over the decades into a movement that promotes the drug for its medical applications. Marijuana use, even for recreational purposes, is no longer the taboo that it once was.  Mainstream society is generally more accepting of marijuana in our modern age, and no longer compares it to more dangerous substances that have a high propensity for addiction or abuse.

Most recently, in the 2016 election, five additional states have voted on full legalization of marijuana.  The states of California, Massachusetts, Nevada and Maine have voted to legalize recreational marijuana in their states, while Arizona was the only state that rejected the ballot initiative.  These results in the four states that passed marijuana legislation on the ballots was a landmark time in the campaign to legalize marijuana for recreational use, and helped to bolster a wider effort that has been underway to repeal the federal prohibition of cannabis.

Since the election, there are now eight states, plus Washington D.C., where recreational use of marijuana is legal.  In addition to the legalization in those states, there were also four states that approved the use of medical marijuana where it is previously prohibited.  Arkansas, Florida, Montana and North Dakota all passed ballot measures on election day to legalize medical marijuana, bringing the total to 28 states in addition to Washington D.C. where patients can opt for this form of medical treatment.

The passing of this referendum in California is particularly positive for marijuana producers, given the large population size that they now have available to them.  Funds that were previously going into the hands of drug dealers will now be invested in businesses, as additional marijuana dispensaries are likely to emerge.  The new laws will allow recreational marijuana stores and public smoking areas to open, as they have in states like Colorado where it was previously made legal.

The economic impact of marijuana legalization has been particularly lucrative for state governments, as a recent 2015 study found that Colorado raked in approximately $120 million in new taxes on almost $1 billion in marijuana sales since legalizing the drug.  The study discovered that these sales ended up having a $2.39 billion dollar impact on the state’s economy by creating new jobs, stimulating business services sales and injecting more money into the consumer base.

These new marijuana legalization laws will mean that the substance will have measures in place similar to how alcohol is already regulated.  A consumer would have to be 21 years of age or older to possess certain small amounts of marijuana without getting into legal trouble, and they will be allowed to grow small plants in their homes. Marijuana dispensaries would be required to obtain appropriate business licenses for the sale of marijuana, and certain tax programs would be put into play.  Every state is different on the amount of marijuana that will be legal to possess, and these laws are typically enforced at the local level.

Although the federal ban on marijuana use is technically still in effect, it is rarely enforced at the federal level in states that have passed legalization measures, but it can still cause issues on tax reporting for people in this line of business.  The 2016 election results, however, could put additional pressure on the federal government to finally do away with this ban, opening up the path for national marijuana dispensaries.

The first law regulating the use of marijuana, or cannabis related products like hemp, was enacted in 1911 in Massachusetts.  This was a very simplistic law, however, and only made users require a prescription from a doctor for the sales of what they referred to as “Indian hemp”.

In the decades to follow this act, several other states began to implement their own forms of regulations.  These laws varied in severity and were anywhere from making the use or cultivation of marijuana a misdemeanor, to outright banning the substance entirely.  The last state law against marijuana was in 1933, when North Dakota and Oklahoma instituted a ban on the drug, bringing the total number of states to criminalize cannabis to 29.

Following the state laws regulating or banning marijuana, the federal government passed the Marijuana Tax Act, which effectively banned the use, sale or cultivation of all forms of marijuana at the national level.  In the decades following this act the state of marijuana remained relatively unchanged, until in 1973 Oregon passed an act that begun the decriminalization of marijuana.  Over the next 20 years several other states followed suit, passing laws acknowledging the possible medical benefits of this plant.

In 1996, California passed the groundbreaking law that legalized the use of medical cannabis, making them the first state in the nation to do so.  That very same year, the first marijuana dispensary was opened in Fairfax, California.

Since the legalization of medical marijuana, numerous states have followed suit by passing their own laws making it legal for patients to use cannabis as an approved treatment for their ailments.  Oregon was the second state to legalize marijuana for medical use, followed by Maine and Nevada.

The medical legalization efforts eventually transformed into the decriminalization of recreational cannabis use, and in 2012 Colorado and Washington became the first states to make it possible for adults 21 years of age or older to use marijuana.  The movement continues, however, and after each election year more and more states are passing similar laws approving recreational or medical use of this plant.  Although the federal ban on marijuana remains in place, there have been no coordinated efforts to block the states from pursuing legalization efforts.

Public opinion of marijuana use and legalization has changed drastically in the past 30 years.  A poll performed by Pew Research found that the percentage of adults supporting the legalization of marijuana increased from a low point of 16% in the 1980s to a high of 53% in 2015.  2010 was the first time that more adults favored marijuana legalization than opposed it since this poll started recording results in the 1960s, indicating a continuing trend towards acceptance.

With the constant improvement of public opinion towards marijuana legalization, various efforts have been made to research the positive impacts of decriminalization.

Similar to how legalizing gambling and building casinos in certain states was viewed as damaging to society, marijuana legalization was also once viewed as more dangerous than beneficial.  However, the states that have legalized its use have seen a tremendous influx of new tax revue generated from marijuana related businesses.  These tax dollars can in turn be used for new infrastructure, parks, education and road repairs.

Less of a Burden on Law Enforcement

Advocates of marijuana legalization have claimed that police officers and our criminal justice systems will have to spend less time and money on prosecuting small offensives, thus being able to focus on more violent or damaging crimes.  An argument can also be made for less tax dollars spent on legal administration of these marijuana offenses and the freeing up our crowded prisons.

It has been speculated that decriminalization of the recreational use of marijuana will provide a safer, cleaner and relatively healthier products to users.  When marijuana users purchase the drug off the streets, there is no way of knowing what other chemicals or substances may be mixed in with it.  With the legalization of marijuana, the production and sale of the product can be more closely controlled and monitored, resulting in a more consistent and safer consumption.

The illegal market for marijuana is an industry that produces millions of dollars for criminal cartels and drug smugglers who bring or distribute the product throughout the county.  By legalizing marijuana, states are effectively dismantling criminal gang’s motivations for selling the drug, since users are now able to access it legally.  This would deprive the criminal organizations of a main source of income as well as diminishing criminal acts committed while they are managing their marijuana trade.

There have been a numerous of studies that have shown marijuana to be effective in treating medical conditions such as glaucoma, nerve pain and even cancer.  The medical benefits of marijuana are available to patients as a viable, natural option to treat illnesses and provide a better quality of life in states where it is legal.  This allows patients to take an active role in their treatment plans by growing their own marijuana plants for medicinal purposes.

Just as the proponents of marijuana legalization have their reason for supporting the drug’s use, there are also those who feel society will be better served by keeping marijuana illegal.  There are various arguments that reference the addictive nature of the drug or also its capacity to be a “gateway drug”, meaning it could lead the user to more harmful substance abuse.

Here are some of the reasons that opponents of marijuana legalization cite to support their positions.

Although the addictive nature of marijuana may not be as severe as harder drugs such as heroin or cocaine, there is still a sizable market for treatment of marijuana addiction.  There is also believed to be many marijuana users who never end up seeking help for their habit, since the drug is relatively easy to access and will not cause intense withdrawal symptoms after ceasing use of it for a few days.  Consistent marijuana users tend to end up factoring in the cost associated with their use into their weekly budgets, much like a tobacco user would, but the dependency on the drug is still present.

Marijuana is a drug that produces psychedelic effects on the mind and can change a user’s perception of reality while under the influence.  Even low to moderate doses can cause a user’s ability to operate a vehicle or perform their job to diminish.  Long term use of marijuana can cause a person’s mind to become dependent on it and they will crave its use before social situations or before going to sleep.  Marijuana is also the most commonly detected nonalcoholic drug found in someone’s system who has been the victim of a fatal traffic accident.

Increased Chance of Teen Drug Use

The same concept applies to marijuana legalization, for if the drug is legal, it has a better chance of being stored normally in a parent’s household just as alcohol or cigarettes would be.  Teenagers in their developmental years could see a greater negative impact on their mental capacity from having easy access to and use of marijuana during this time of their lives.

Risk of Heart and Lung Disease

Like tobacco, marijuana can have a severe impact on the user’s overall health, particularly their heart.  Marijuana use can raise your heart rate from between 20 and 100 percent for up to 3 hours after it has been smoked, increasing the risk of future heart problems or having a heart attack.  Smoking marijuana can also cause poor lung health, as its level of carcinogens are estimated to be almost double those of tobacco smoke, and users tend to inhale marijuana smoke much more deeply than cigarettes.

For now the battle to legalize marijuana has been focused on the state level, with the federal government giving no indication that they are open to nationwide legalization.  The general trend seems to be in the favor of pro-legalization advocates, as each election adds more states where the drug becomes legal for either medial or recreational uses.  If this trend continues, with almost all of the states looking towards legislation on marijuana use, it’s likely the federal government will have enough support from voters to move forward with decriminalization legislation. 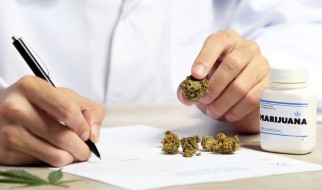